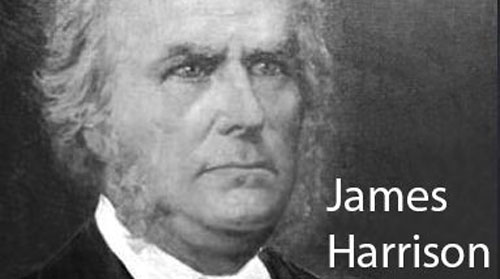 April 17th: James Harrison Day – This day in RACHP history
Today is James Harrison Day. Harrison (born #onthisday April 17th 1816) is the epitome of an engineering pioneer in the field of mechanical refrigeration. Harrison was born in Bonhill, in Dunbartonshire, Scotland but moved to Australia to take up a position as a print machine ‘compositer’ for a publisher in Sydney.

The story of how Harrison came to take an interest in refrigeration is that he noticed the cooling effect of the evaporation of sulphuric ether while cleaning printer’s ink from type. He built and experimented with a closed refrigerating system and after improvement secured Victoria Patent 25 in 1855, followed by British Patents 747 in 1856 and then BP 749.

Harrison’s novel refrigeration system utilised a compressor to force ether vapour into a condenser. The ether reverted to liquid form and then moved through refrigeration coils. As it turned back into vapour form, it cooled the surrounding machine

Returning to England he sought assistance from Siebe & Company, an experienced manufacturer of steam engines. Harrison secured another patent, BP 2362, for machines for domestic use, for cooling brewer’s wort and for cooling houses and hospitals. A small ice-making machine of É horsepower was made by Siebe and demonstrated in London, Paris and Vienna. Other machines went to Australia and one was sold to the brewery of Truman Hanbury & Buxton in London.

Prestige and Awards
Although Harrison never made a fortune from his invention, he had the satisfaction and prestige of knowing the Harrison-Siebe refrigerating machine won medals at London’s South Kensington International Exhibition in 1862, and at Vienna’s International Exhibition of 1873. These machines were also adopted as standard equipment for field hospitals in the British campaigns in Africa. The basic design remained unchanged until 1888.

James Harrison, the Scottish-Australian that changed our world forever.

Does the RACHP industry have 365 days worth of significant historical dates?
We have a wonderfully diverse industry, rich in technical and scientific marvels, made possible by amazing people both today and in the past. Its time to tell their stories. Enough to fill a full year , all 365 days? You tell me?

Please send me suggestions to me and we will include them as part of the World Refrigeration Day* initiative.

*World Refrigeration Day is an initiative to raise awareness and understanding of the significant role that the industry and its technology play in modern life and society. World Refrigeration Day has been established as June 26th annually, with other supporting initiaves such as the RACHP Calendar taking place throughout the year.